The “Mantra Workshops”: An Activity in Service of Enlightenment

With less than two months remaining prior to the consecration of the stupa that will house a part of Kunzig Shamar Rinpoche’s relics, we are busying ourselves all over to prepare the substances that will fill the stupa. Among these, there are thousands of mantra rolls created in workshops set up at Dhagpo, Kundreul Ling, as well as numerous Dhagpos, urban centers) (1). 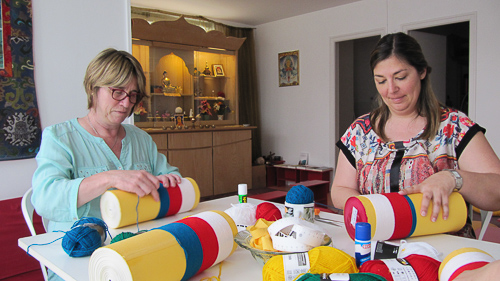 At the Niort KTT 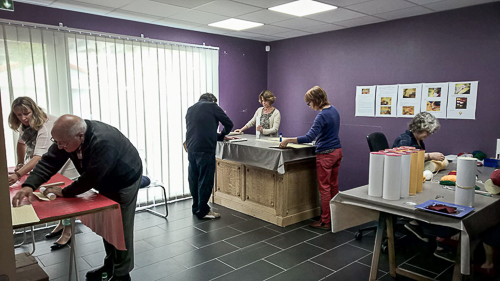 Kunzig Shamar Rinpoche defined a mantra (a Sanskrit word) as a “series of sounds or syllables intended for recitation, that embodies the nature of a meditation deity.”(2). Suffice to say that there exist innumerable types depending on whether the mantras are associated with one or another meditation deity (yidam, in Tibetan) and according to the type of activity of the deity in question (peaceful, wrathful, etc.)

The stupa will contain the mantras of various deities as well as some connected to lamas. (3) The mantras are printed on scrolls of different sizes: thirty centimeters for the largest and two centimeters for the smallest (which will be enclosed within the tsa-tsas), along with an intermediate format of fifteen centimers. They will be placed in the heart of each part of the stupa (as a reminder: the base, the middle level [the steps], the vase or bumpa [the bell-shaped part] and the thirteen upper rings). As we may remember, the scrolls containing the mantras of Dorje Sempa and those of interdependence will be placed all throughout the monument as a form of correction for any mistakes made during the installation of the substances!

The creation of a mantra roll requires dexterity and vigilance throughout the various steps. But what are they?

First, we print the mantras in red ink on yellow paper. Traditionally, of course, “printing” never entered the equation; one painted the paper with saffron water, which was a mark of preciousness and also promised an exercise in patience (as one then had to wait for the pages to dry!). In the modern day, we can leave out this step by printing on yellow-gold paper. 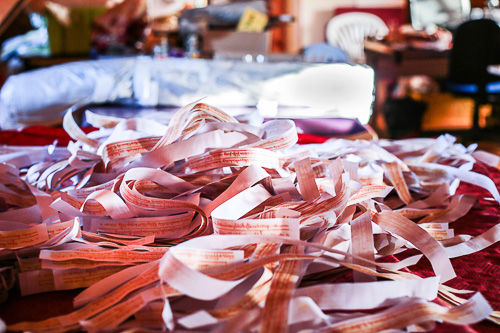 When the sheets of mantras are ready, we glue them from end to end and then rolls them up with the text on the inside. A stick of incense serves to begin the roll and thus marks its center once completed. We takes care to tightly roll the sheets and make sure their edges are aligned—for this, we often use a small wooden plank to tap the top of the roll. The largest rolls have a diameter of ten or fifteen centimeters. 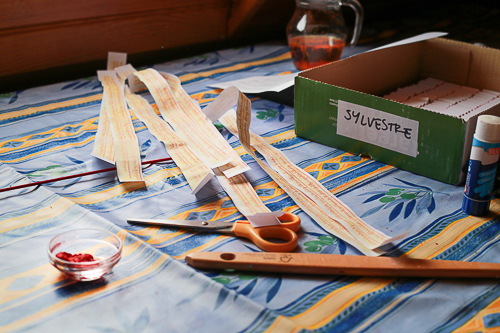 Preparation of a Small Roll 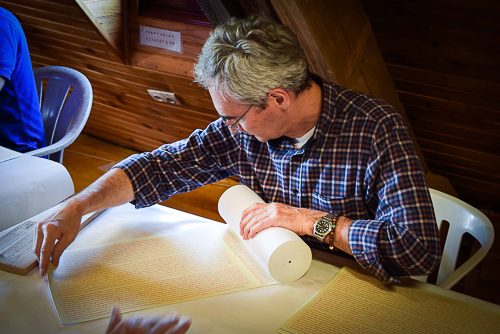 Creation of a Roll 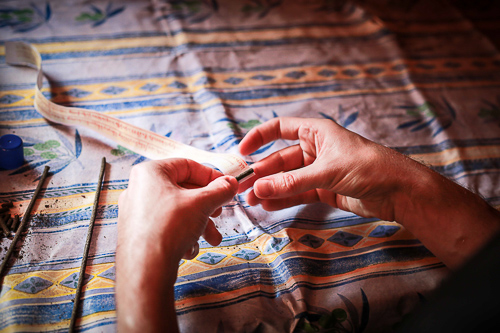 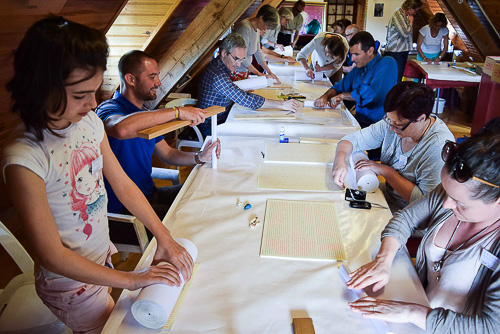 Young and Old at Work!

Once we have formed the roll, the text is no longer visible and it is necessary to be able to distinguish the top from the bottom; therefore, we paint the top of the roll red at this time. It is also essential to be able to identify which mantra the roll contains; we stick a label on top of the roll for this purpose. 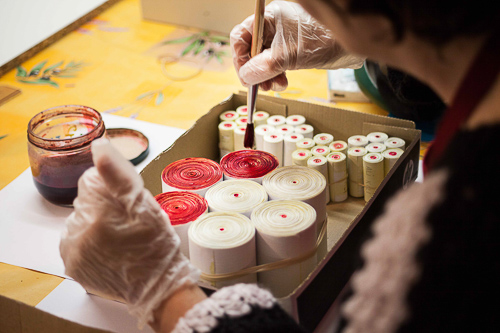 Applying Red Paint to Identify the Top of the Rolls 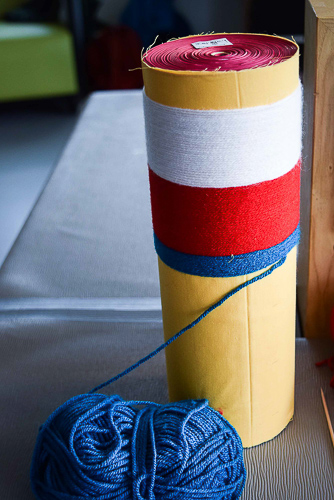 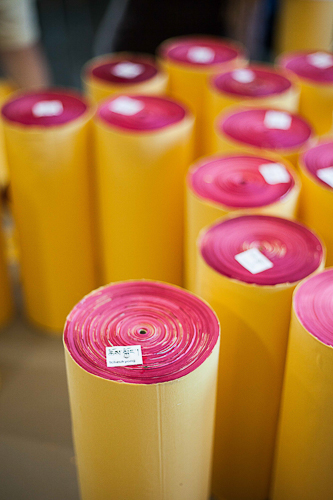 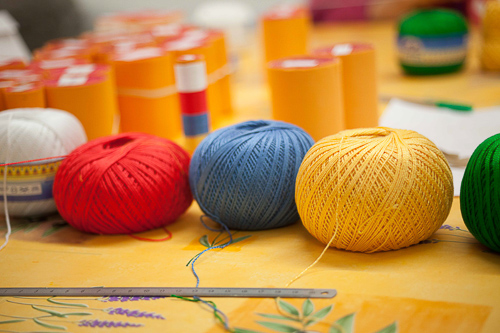 Finally, to dress the roll in its finest attire, we enrobe it in yellow fabric (obviously the color is not without meaning; we can guess the reference to the robes of the Buddha and sangha), which does not however cover the top or bottom, and we wrap it in five colors of yarn (green, yellow, blue, red, and white) representing the five enlightened wisdoms. 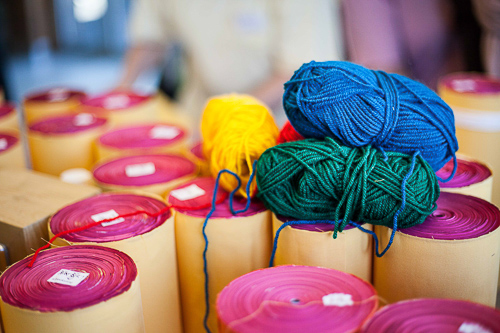 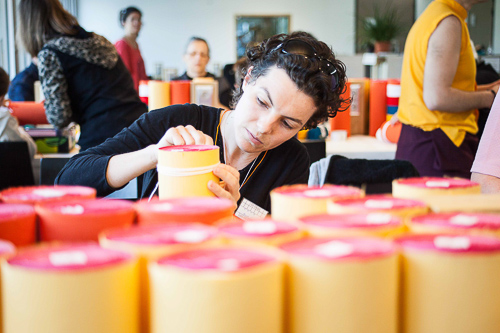 Applying the First Section of Yarn 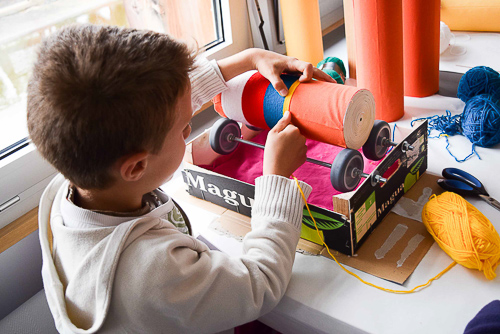 Someone Even Invented a Yarn-Wrapping Machine!

These are steps participants in the mantra roll creation workshops followed, somewhere between seriousness and relaxation. For this is not an ordinary activity but a practice in an of itself. For example, it is the occasion to murmur mantras or to reflect on the Buddha’s teaching and, why not, to share one’s understanding with others. Beyond the creation of the rolls, the workshops were a meeting place for participants of all ages and sometimes an opportunity to discover an as-yet unknown place for some among them. In this way, each individual was able to connect to the beautiful project that is the construction of Dhagpo’s new stupa.

At the conclusion of this new chapter of the adventure, one thousand large rolls and one thousand small rolls had been created by the many volunteers. They are currently being stored in Dhagpo’s library stacks awaiting the fast-approaching moment when they can carry out their work within the stupa.

If you would like to take part in the stupa project by making offerings or helping in another way, do not hesitate to contact us: stupa@dhagpo.org. You can also offer one or many mantra rolls or tsatsas—all the necessary information can be found on the ”Join In” page!

Of Note: Interested in the mantra roll creation workshops? You should know that, based on the enthusiasm surrounding these workshops, Kundreul Ling now organizes retreats around this activity (linked page in French). There are many rolls left to be made, whether for the statues of Le Bost’s great temple or the one recently ordered by Jigme Rinpoche for Dhagpo’s small temple. These retreats alternate sessions of practice and activity in the workshops. If you would like to register, contact Ouangtchouk: ktl.statue@dhagpo-kagyu.org. 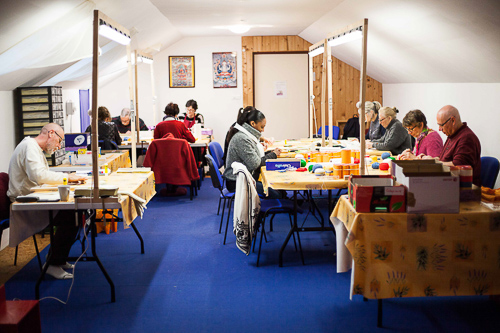 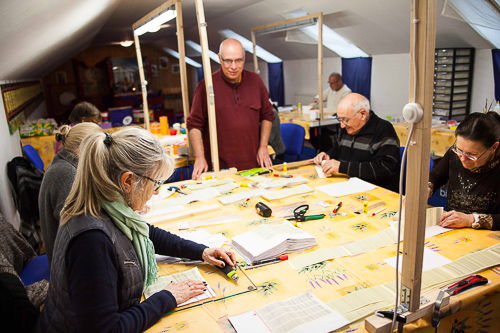 (1) ↑ Among these, Dhagpo Limoges, Albi, Belvis, Nantes, Poitiers, La Rochelle, Niort, etc. (this is a non-exhaustive liste). Furthermore, if you have taken photos of the mantra workshops in your KTT, don’t hesitate to send them so we can publish them on the site : relations.donateurs@dhagpo.org !

← At the Heart of the Stupa The Sokshing, a Sacred “Spine!” →