In Astamahasthanacaitya–stotras, the Indian master Nagarjuna associates the eight stupas with the four principle pilgrimage sites—the Buddha’s birth in Lumbini, his enlightenment in Bodh Gaya, his first teaching in Sarnath, and his death in Kushinagar—and four extraordinary acts—the demonstration of miracles, the return from the divine realms, the reconciliation of the divided community, and the complete victory.
Let’s look a little closer at each of these eight stupas. 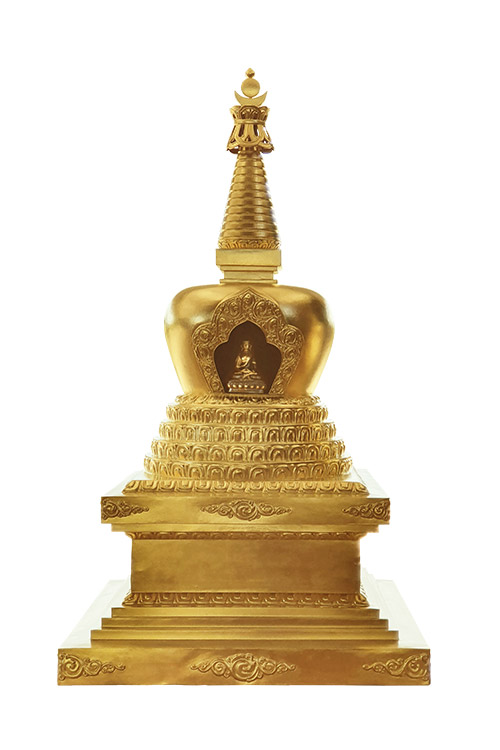 This stupa commemorates Siddhartha’s birth. At that time, tradition in the region dictated that a woman should give birth in her parents’ home. As her pregnancy reached full term, Queen Mahamaya set out for the capital of her home kingdom, Ramagama. On the way, she stopped for a break in the beautiful garden of Lumbini, in the ancient kingdom of Kapilavastu, found in modern-day Nepal. Unexpectedly, she gave birth to the prince there.

This stupa is also called The Stupa of Mounds of Lotuses (pepung chöten པད་ཕུང་མཆོད་རྟེན།) due to its round form and decorations of lotus petals that bring to mind the lotus flowers that blossomed spontaneously under his feet as the child who would become the Buddha took his first steps. 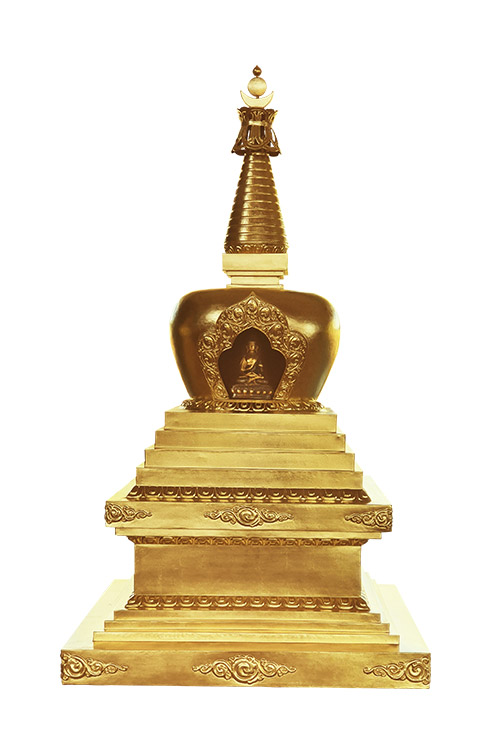 Siddhartha sat for forty-nine days under a ficus religiosa tree (also called a bodhi tree), having made the firm resolution to find the truth that would liberate beings from suffering. This stupa marks his realization of enlightenment when, on the dawn of the forty-ninth day, the one who became known as The Enlightened One understood the truth of suffering and its origin as well as its cessation. At that moment, he cried out , “All beings possess the seeds of enlightenment. Yet they drown in the ocean of births and deaths during countless existences!” 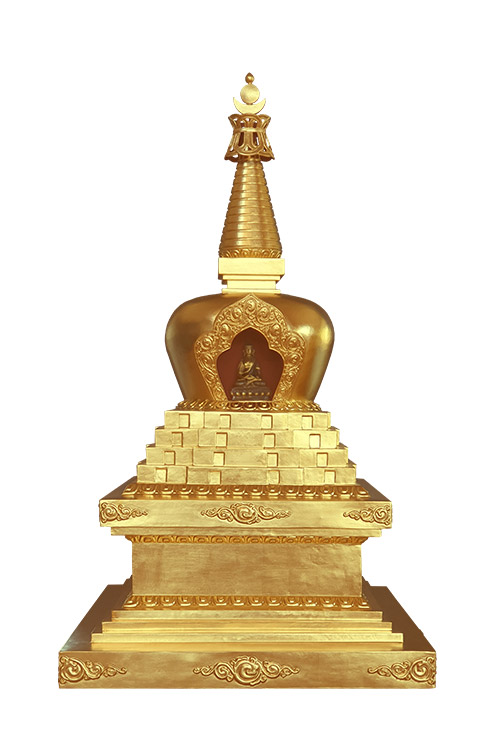 Seven weeks after his enlightenment, the Buddha went to Sarnath and rejoined his five first ascetic companions in the garden known as Deer Park. He began to turn the wheel of the Dharma by explaining the four truths of the noble ones—the truth of suffering, the truth of the origin of suffering, the truth of cessation, and the truth of the path that leads to this cessation—to them.
This stupa is also called The Stupa of Many Doors (gomang chöten སྒོ་མང་མཆོད་རྟེན།) because its steps are ornamented with doors that symbolize the opening of the doors of the Dharma. 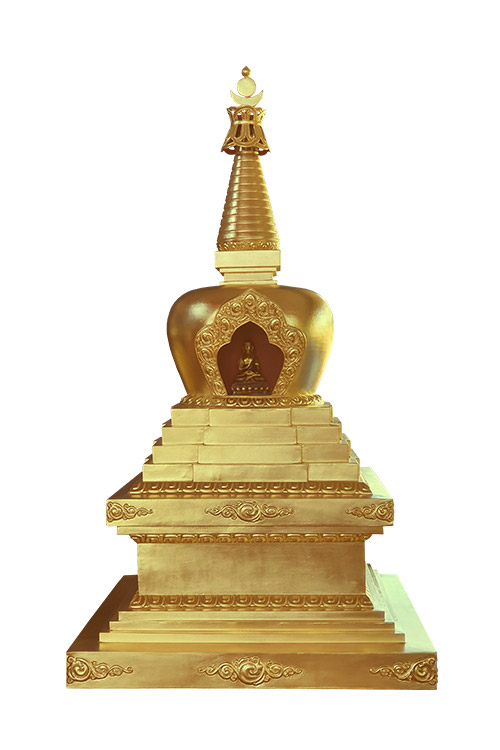 This stupa reminds us of the miracles that the Buddha accomplished at Shravasti in response to a challenge by some extreme ascetic Hindus. The Hindu masters were having difficulty collecting alms, and they wanted to oppose the Buddha, believing him to be incapable of even the smallest miracle. The Buddha responded by performing numerous miracles, which allowed the crowd gathered there to develop greater confidence in the three jewels. He then gave a multitude of teachings in accordance with the capacity of each individual. 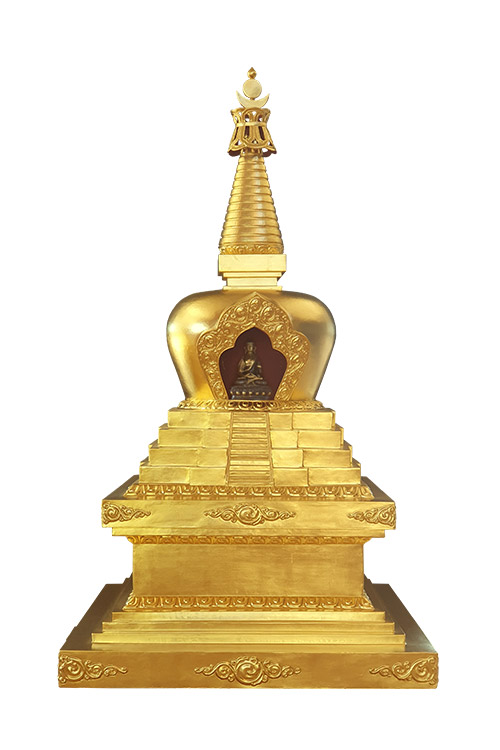 Shortly after Siddartha’s birth, his mother Mayadevi, passed away. After having become the Buddha, he saw that she had taken rebirth in the divine realm of the thirty-three gods. As a means of repaying her kindness, the Buddha decided to spend three months in the divine realms in order to teach her and the various other types of gods found there the path of liberation.
This stupa represents the Buddha’s return to the continent of the jambu fruit tree in order to continue his teaching there. The staircases in the four directions of the stupa symbolize his descent among human beings.

This stupa symbolized the reconciliation of the monastic community after an internal division caused by Devadatta in Rajgir. Out of jealousy, Devadatta had convinced some monks to leave the Buddha’s community and found another under his own leadership. At the Buddha’s request, his disciples Maudgalyayana and Shariputra went to meet these monks and clarify their confusion, which allowed to bring the division to an end and unite the community once more. 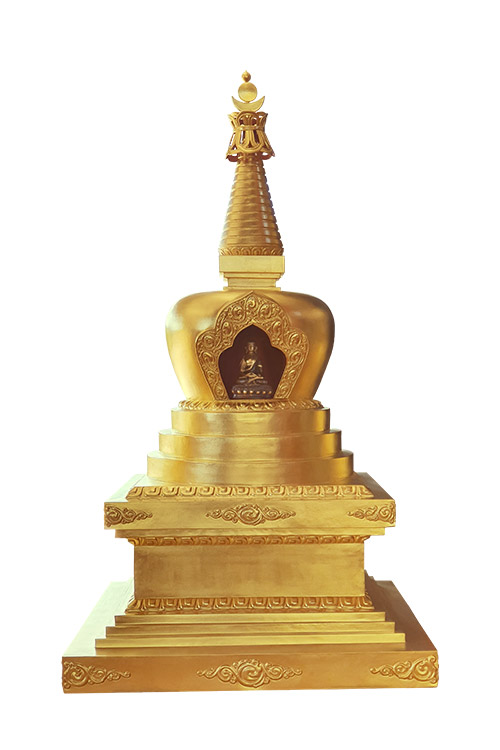 This stupa commemorates the Buddha’s ability to control his longevity. When in Vaishali (or Nalanda, according to some sources), he announced to his close disciple Ananda that he would leave this world three months hence. In honor of this, it is called the stupa of complete victory over death. 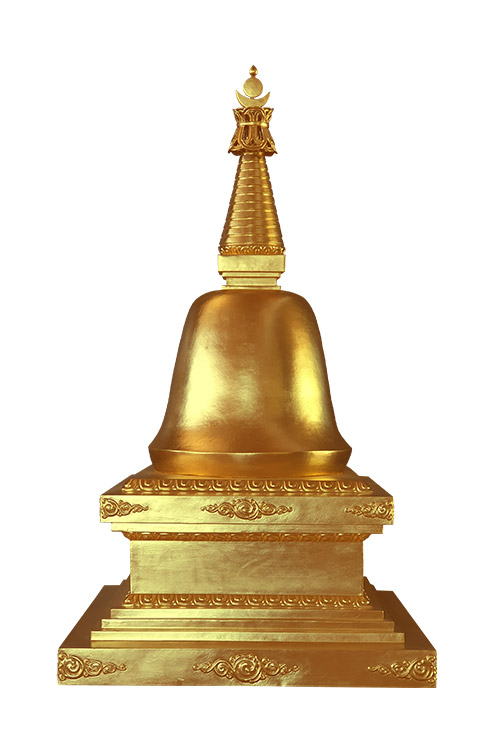 This stupa marks the death of the Buddha. The Buddha fell ill while on the road to Kushinagar. Aware that the moment of his death was approaching, he asked Ananda to prepare him a place to die. Lying on his right side in a state of profound meditation, he left our world to enter into parinirvana after having giving his final teaching to the disciples gathered around him, “Monks, never forget: all conditioned phenomena are impermanent.”

Article Sources and Further Reading on the Buddha’s Life:

← Video - The meditation Garden – Filling the Bases Autumn Plantings | In pictures →
We will keep you informed of the advancement of construction. Don’t hestitate to sign up for Dhagpo’s newsletter to receive the latest news in words, photo, and video.
If you would like to participate to the project, please visit our page “Join In”!