On November 26, 2017, the stupa’s definitive statue was installed.
You can relive the moment below.

Nestled in the heart of the stupa, this statue is the first statue of 14th Shamar Rinpoche created. Bénédicte Henicz, a French artist and disciple of Shamar Rinpoche, realized the statue with guidance from Jigme Rinpoche.
Here, she tells us more about the steps of its creation.

Dhagpo: Hello Bénédicte. Could you explain to us how the idea of sculpting a statue of Shamar Rinpoche came about?
I am a sculptor and work on my own creations, which belong more to the domain of contemporary art. A few days before Shamarpa’s passing, a strange feeling came over me: I needed to sculpt his bust! The feeling was so strong and present that I called my husband to tell him about it.
It so happened that, at the moment that I called him, he was having a personal interview with Shamarpa at his Bodhi Path Center in Renchen Ulm. Shamarpa did not wish for me to sculpt his bust. I didn’t know that, at that point, my request was maladroit and that a bust is meant to be a memory of some one that has passed away.
Nonetheless, Shamarpa said that he would come visit us in France once his teachings in Germany had concluded. The day before his visit, with no disrespect on my part, I simply couldn’t manage to prepare for his visit. The next morning, we learned that Shamarpa had passed away. Several weeks later, Jigme Rinpoche commissioned me to sculpt the bust of Shamar Rinpoche. I then realized that the visit Shamarpa had mentioned to us would be quite different from what I had imagined! The teaching began from there…
Dhagpo: What were the different steps in the creation of the statue?
Jigme Rinpoche guided me in my work, though of course not in a technical sense. He didn’t tell me what I should do, but he showed me several photos of ancient Buddhas and of Shamarpa. This world of sacred sculpture was totally new to me.
Through Jigme Rinpoche’s remarks and corrections, I came to the idea that there is a sense that is not perceived visually.
Rinpoche was very patient and showed me great kindness because, as I can see looking back, I was very attached to my artistic vision!
I also realized that I was in Shamarpa’s service. Each time I dealt with serious doubts about my work and I was ready to just give up, Shamarpa came to me in a dream and gave me the necessary keys to continue from where I was.
Dhagpo: How much time did the process of creating the final statue take from start to finish?
I started the bust in clay in November 2014. The process took two and a half years. The finished bust weighed 40 kilos. Then, there was a technical step necessary to reduce it to the requested size.
The work on the body and the lotus was also quite long, with the various mudras, the robes, and the base. Then, with my technical team, we moved on to prototyping the different ways of assembling the body before creating the mold and then continuing to the creation of the statue in wax.
The wax is the last step of significant retouching; it’s an ephemeral creation because you have to make a new one each time someone orders a bronze statue. For each bronze statue, a wax model goes into the furnace. The wax melts and bronze is poured in its place.
Once cooled, the bronze is cleaned, polished, and sanded. Then comes the step of adding patina.
Throughout all these different steps, the statue must keep its expression. That’s why I learned to do all the different steps in the process myself (with the exception of pouring the bronze).
Jigme Rinpoche came to see the local foundry in France, he directed and checked the patina step of the statue.
Dhagpo: What part of this process left the greatest impact on you? 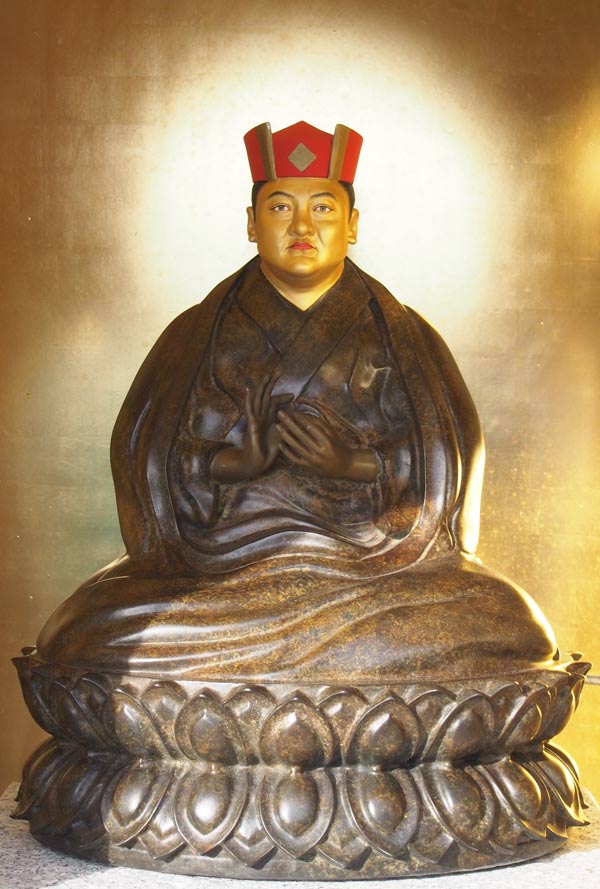 Doing commission work that is also sacred art is quite unusual.
My ego got put through the wringer. And I had thought I was working in total humility. I never would have imagined going through so many emotions and that they would lead me to see my work as a sculptor in a different way!
The most difficult part was sculpting Shamarpa’s smile without…making him actually smile! The subtlety was complicated; to sculpt a smile is simple technique, but to introduce the idea of a compassionate smile without directly sculpting it, but rather by suggesting it with his gaze…that took a lot longer to get.
This experience was equally enriching on a spiritual level as a professional one. It helped me understand that we always have a lot to learn.
For more information, visit www.dharmasculptures.com

If you would like to participate to the project, please visit our page “Join In”!

← < Consecration of the Stupa, a day of Duchen